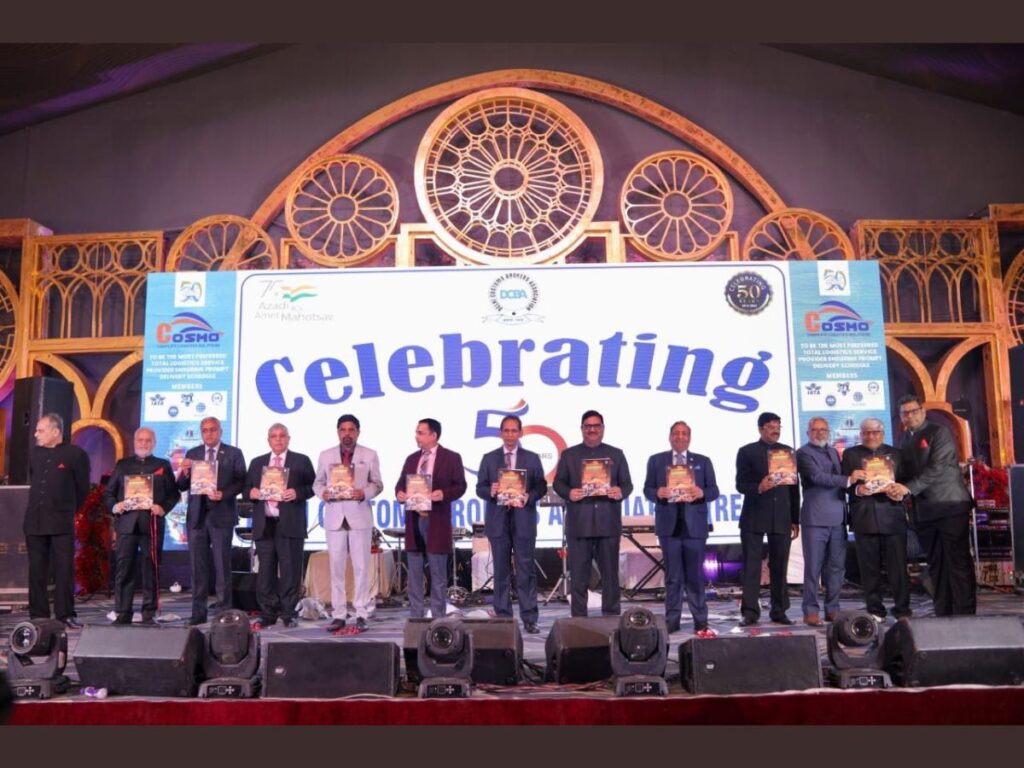 New Delhi (India), December 27: It was a memorable evening to cherish when Delhi Customs Brokers Association (DCBA) celebrated their Golden Jubilee on 18 December’ 2022 at Stellar Resorts, NH-8, New Delhi.  The gala event was graced by the presence of distinguished luminaries from the Logistics Industry and the Customs Department.

The key highlight of the event was the felicitation of Industry Achievers and Icons who had brought laurels to the nation with their unparalleled contribution in the logistics field. The milestones achieved by the Delhi Customs Brokers Association were enumerated during the course of the event.

Interacting with the Media, Puneet Jain, President DCBA shared, “The journey of DCBA from 1972 till date has been truly phenomenal, and is an inspiration for all of us, thus we wanted to celebrate the special occasion with a grand event. I extend my gratitude to former Presidents and all fellow members of our fraternity for guiding me constantly in making DCBA a more robust and efficient body. Our organization contributes significantly to giving a boost to country’s economy. As the present President, I am pledged to carry forward the good works of my predecessors and previous committee members for the betterment of the trade. The focus of the present government all these years has been on introducing new trade facilitation measures and faster augmentation of logistics infrastructure. Ever since it came into being in the year 1972, the DCBA has played an exemplary role in not only making the process of customs clearance much more convenient and less time consuming, but more importantly played a sterling role in suggesting new reforms that have subsequently accepted by various governments to incorporate in their new policy formulation. It is a matter of immense pride that the government gives due importance to organizations like DCBA before formulating or introducing any new policy pertaining to the Logistics trade. Delhi Customs Brokers Association working has been in absolute compliance with supporting the government’s theme of “Ease of doing Business”. The 50 years’ journey has been an eventful one with numerous milestones as well as learning’s for the members of DCBA.”

Devendra Singh Bhadoria, Honorary Secretary, DCBA said, “DCBA has been hosting events at regular intervals to propagate the importance of Logistics in giving a boost to economy, which in turn promotes the idea of “New India” and aiding in the process of making India a VishwaGuru. The hallmark of our events has also been our focus on empowering the different sections of the society especially the talented and the unsung heroes. As far our expectations from the government are concerned, it has been our long impending demand that the ruling dispensation must empower our existence and contribution with an apt validation so that we are treated like any professional organization namely the Bar Council of India etc. Also, we seek appreciation as frontline warriors like police and para-medical force for our services during any natural calamity or pandemic situation like COVID-19 to make the logistics services unhindered. We are grateful to the government for providing us two platforms namely Customs Clearance Facilitation Committee (CCFC) and Port Trade Facilitation Committee (PTFC). These two platforms are there for addressing the grievances of the customs brokers.”

Speaking on the occasion, Zubair Riaz Kamili, Commissioner of Customs (Airport & General) said, “DCBA is celebrating their journey of 50 years, while the Custom Act that gave license to Custom Brokers to operate has recently celebrated its 60th Anniversary, so one can very well gauge the deep bond between the Customs Department and the DCBA. We expect the DCBA to fully cooperate with us, and similarly the Customs Department will extend all their support to DCBA in terms of facilitation, and ensuring that we continuously improvise our custom business procedures so as to remove the red tape. We will build Anonymous Interface so that there is no scope of any complaint or harassment. DCBA are our equal partners in the journey to automate and bringing about transparency and clean administration.”

Informed S.L Sharma, Former Vice President, DCBA and Chairman, Skyways Air Services Pvt Ltd., “Since the custom clearing business was not organized in the 1970s, it was strongly felt to bring the various custom brokers under one umbrella, and thus DCBA was formed to make the sector not only more organized, but also to address the various lacunas existent at that time. It was the late Col J.H Chibber, a visionary par excellence who deserves the credit for bringing DCBA to life as he was certain that bringing all Custom Brokers under one ambit would help bring about uniformity as well as more transparency. He was also the first President of the erstwhile Delhi Customs Clearing Agents Association (now Delhi Customs Brokers Association). It will be no exaggeration to describe the 50 year existence of DCBA as a splendid journey as we have grown in stature and played a vital role in giving a boost to the country’s economy. From being known as Custom House Agents (CHA) in the earlier times to carving a niche as Custom Brokers, the DCBA has gone from strength to strength over the years. Starting with a handful of 22 members in 1972, the DCBA presently boasts of having a strength of close to 1200 members. We expect the government to do a closer monitoring of the custodian handling of import and export goods. Though custom brokers are grappling with copious issues due to the new business ecosystem pertaining to customs broking business, the new committee is committed to initiate more activities towards enhancing the skills and domain knowledge of its members to cope with any changing scenario to sustain.”

S. Ramakrishna, Past President, DCBA and Past Chairman, FFFAI added, “Akin to the present faceless system of income tax assessment, the Customs Clearance too has become a faceless assessment, and this is being hailed as a big reform as it will rid the system of corruption. The newly incorporated faceless assessment of customs clearance has been duly lauded by PM Narendra Modi who has always laid stress on making the system more transparent and corruption free. The Golden Jubilee event of DCBA @ Stellar was successful in promoting the best of what DCBA had been doing for the last 50 years, thus paving the way for the opening of new frontiers for all those associated with the event. A win-win state for all the stakeholders that have pledged to show the real prowess and might of “New India“.”

P.S Atree, Past President, DCBA observed, “Logistics being an important component of commerce, both the government and the key stakeholders need to give it the top most priority, and thus work in consonance. There can’t be any ambiguity about the fact that smooth facilitation measures hold the key to enhancing the overall image of Logistic sector on the global arena. In sync with the vision of the present ruling dispensation that has been emphasizing on consolidating the Logistics Sector, we believe that it has been the outcome of our collective efforts and timely suggestions that led to inspiring the government to formulate a National Logistics Policy (NLP) which is aimed at enhancing efficiency of the logistics ecosystem in India. It will ensure “quick last mile delivery”, end transport related challenges, in addition to saving time and money of the manufacturers, and preventing wastage of the agro products. The resulting improvement in the coordination will lead to the desired speed in the sector. Completion of 50 years of our existence is indubitably a momentous occasion for the entire custom broker fraternity. In the last one decade especially, the DCBA has spearheaded many incredible initiatives. We have gone an extra mile to provide a sturdy platform to our fellow members which in turn has helped DCBA carve a niche for itself in the sphere of logistics. The DCBA swiftly adopted the 24×7 working model to facilitate round the clock custom clearance business. The Customs Clearing Agents played a pivotal role during the Covid outbreak when they worked 24×7 as tireless Crusaders on Ground Zero to ensure timely clearance and smooth facilitation without any glitches.”

Rajesh Verma, Vice Chairman, Federation of Freight Forwarders’ Associations in India (FFFAI) and President Ludhiana Customs Brokers Association said, “Golden Jubilee celebrations of DCBA undoubtedly marks a new era for logistics in India. Inspired by the current wave in our country about “Sabka Prayas”, Custom Brokers have been in the forefront to contribute their bit towards economy. Much like the “Azadi Ka Amrit Mahotsav” being celebrated all over the country, it is remarkable the DCBA is celebrating their 50 years of existence so bringing to fore the achievements of their former Presidents and other key members. The key aim was not only to announce India’s arrival on the global logistics arena, but also to showcase to the outside world how India has actually been a Torchbearer in the logistics avenue.”

Yashpal Sharma, M.D Skyways Air Services Pvt Ltd & Member, DCBA viewed, “There is immense importance of customs clearance process in the international trade. The goods have to undergo customs clearance for their release. Those handling your shipment and customs documentation must be seasoned ones. The role of the customs clearance function in the Import Export process involves the preparation as well as the submission of Import Export documentation. As Customs Clearing Agents, we represent a company before the customs examination and assess the document. We help in the process of payment of duties and releasing of the cargo from customs after the clearance of documents. Large companies like ours ensure export clearance success while sending and receiving goods from different ports. It is important for the companies to give accurate information to your customs broker as this will help the customs broker to perform their task efficiently. We salute PM Modi’s leadership qualities and the pathbreaking initiatives of the government to empower the logistics sector. At DCBA, we have always accepted challenges, and believed in contributing our bit towards “Nation Building“. The ideology of DCBA has been in sync with the vision of the Modi government that aspires to transform India into an “Atmanirbhar Bharat” with incredible initiatives such as “Make in India”, “Skill India” and “Digital India.”

Umesh Chaturvedi, Managing Committee Member, DCBA, said, “The DCBA wants the focus of the government to be on allocation of the Airlines to the custodian as well as setting a parameter viz a viz the capacity of the custodian to handle the load. In short, key thrust of DCBA has been on introducing trade facilitation measures by the Customs, collaborating with the Customs, govt agencies and all other stakeholders. Our government has done remarkable work in upgrading the existent infrastructure for boosting the economic & tourist development of the state. This includes good quality wide roads, ports, well-developed road network coupled with uninterrupted power supply, and proper road lighting. The DCBA was among the first few organizations that earnestly adopted the Authorized Economic Operator (AEO), a pilot Program of the World Customs Organization (WCO). Over the years, the DCBA has efficiently acted as a bridge between the Exporters- Importers and the Customs Department. The Customs Brokers Licence Regulation (CBLR) that was launched in 1984 is presently conducting the exams digitally unlike the earlier times when they were all done manually. The logistics cost and the overall time of clearance has drastically reduced with passage of time, and this has been a huge accomplishment. The operations of DCBA have switched to the digital mode.”